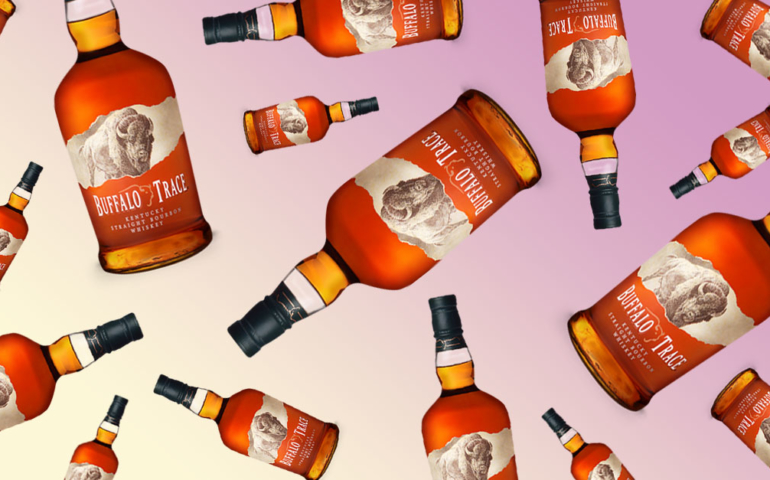 When you hear the name “Buffalo Trace” you probably think of a bottle of bourbon whiskey with a proud- and/or slightly pissed-looking buffalo on the label (wouldn’t you be?). But in the world of bourbon, Buffalo Trace isn’t just a bottle.

Buffalo Trace’s legacy (originally Old Fire Copper Distillery) basically encapsulates the history of American bourbon itself. The brand has gone through several names, a catastrophic lightning strike, a devastating flood, that little Prohibition hiccup, and even an unlikely (and almost game-ending) rivalry with vodka and gin in the 1970s and ‘80s. And yet somehow, the brand (and maybe the buffalo) is still kicking.

Below are 10 Buffalo Trace facts to ponder the next time you pour a couple fingers, whether it’s flagship Buffalo Trace, a game-changing single barrel called Blanton’s, or something a bit more expensive (if $20K is out of your budget, check out our favorite cheap whiskey bottles here.)

A “buffalo trace” is a thing.

The distillery had a few names over the years. First, it was the Old Fire Copper Distillery. It was later, and for the longest period, called George T. Stagg Company, named after its second owner. It was finally and decisively rechristened Buffalo Trace in 1999.

The name honors old local “buffalo trace” roadways stamped onto the landscape by actual buffalo roaming the untamed wilderness of early America. The connection to distilling isn’t only geographic: Those traces became essential routes for explorers, settlers, farmers, and other early American professionals (as this was before the age of the Influencer, who can largely work remotely or anywhere near ice cream).

The Buffalo Trace distillery is a National Historic Landmark.

Buffalo Trace was declared a National Historic Landmark in 2013, in large part because it’s the oldest continuously operating distillery in America. Indeed, it is “a rare, intact example of a distillery operating before, during, and after Prohibition,” according to Buffalo Trace’s own award submission. (See below for the “during” part).

Buffalo Trace’s head honchos were the heavy hitters of bourbon.

Buffalo Trace’s historic lineage is like a who’s who of bourbon: There’s the founder, Colonel E. H. Taylor (a descendent of Presidents Madison and Taylor); George Stagg (the business-savvy bourbon innovator for whom the distillery was named for about a century); Albert B. Blanton (who kept the distillery running through Prohibition and was in many ways responsible for turning the distillery itself into a focal point of bourbon culture), even Pappy Van Winkle himself (a name that sounds like a bourbon elf, if such a thing existed, he was that magical, see below).

Among the most important names on the Buffalo Trace roster is that of Elmer T. Lee. And Buffalo Trace almost didn’t hire him! (See below.) It did, and bourbon in general is better off for it, since Lee — its first ever master distiller — basically resuscitated bourbon (his New York Times obit gives a hint of the glint of his bourbon star power). Long story short, Lee came up in the distillery as bourbon was at a low point (i.e., actually struggling against vodka and gin).

Rather than learn to love a Dirty Martini, Lee created a bourbon that radically emphasized the process and nuance behind quality bourbon, creating the first-ever single barrel bourbon, Blanton’s Single Barrel, and introducing thirsty Americans to the concept of premium bourbon in general. (And we haven’t un-obsessed ourselves yet.)

When Lee first applied to work at Buffalo Trace, he was turned away. Fortunately clearer heads prevailed (someone told Lee to just show up anyway) and Lee eventually became the distillery’s first master distiller. Beyond basically saving the bourbon industry, he worked at the distillery from 1949 until his retirement in 1985. And yes, you can technically toast him with any of the delicious craft bourbon’s he helped pave the way for; there’s also an Elmer T. Lee bourbon.

Buffalo Trace was only one of four distilleries boozing it up over Prohibition.

Prohibition closed down almost every alcohol producer in the country, but for a select few. Buffalo Trace was one of only four distilleries allowed to remain open. While a few wineries remained open to make sacramental wine (sure), the handful of distilleries like Buffalo Trace (still George T. Stagg back then) were making “medicinal whiskey,” since these were still the days of “medicinal booze,” and wonderful/quack physicians kept busy writing whiskey prescriptions for fevers, colds, boredom, sobriety, or whatever malady you could present.

Buffalo Trace is boozier than it legally has to be.

Among the few, but vital, laws governing bourbon production in America is that bourbon must be a minimum of 40 percent ABV (80 proof) in the bottle. You’ll see variations, of course, including powerhouse ABVs called “cask strength” (meaning the bourbon wasn’t cut with any water). But standard Buffalo Trace bourbon clocks in at 45 percent ABV, which isn’t uncommon among flagship bourbons (see Bulleit, Four Roses, etc.). This means there’s a bit more “heat” on the palate, though for much of the Buffalo Trace line that’s balanced out by heavy corn flavor.

Bourbon has to be made with a mash bill that’s minimum 51 percent corn by law (mash bills being the ingredients list of grains that get turned into tasty alcohol). Buffalo Trace wisely keeps its mash bills pretty secretive, but it is fairly well known that its main mash bill, or “Mash Bill #1,” goes heavy on (non-GMO) corn, with some estimates having the corn percentage as high as 90 percent of the yellow stuff. (People really try to figure this out.) The result is sweeter bourbon with a leaner heat than you’d get from a heavier wheat or spicier rye content. Because BT uses more than one mash bill and ages its bourbons differently, you’ll still get get whiskies that are variously sweeter, spicier, smoother, thicker, perkier, more delicate, sturdier, etc., all under the “Buffalo Trace” umbrella.

Pappy Van Winkle, for instance. A “wheated” bourbon, the invention of William Larue Weller, Pappy has a higher proportion of wheat after that first, legally required 51 percent corn. That isn’t the only thing that makes Pappy Van Winkle so expensive or obsessed (and punched and kicked) over. The storied, scarce bourbon has other things going for it: lore, scarcity, aging time, flavor, strange containers.

Buffalo Trace makes one of the most expensive whiskeys on the market.

Another prestigious bourbon line under the Buffalo Trace umbrella, Eagle Rare bourbon is aged for no fewer than 10 years. And while yes, there’s a 17-year-old version, why not get really ambitious and try Double Eagle Very Rare, which is aged for 20 years minimum, housed in a silver box that lights up when you open it, and was made in super-limited quantities? Of course, the price tag is a bit prohibitive — the bottle costs anywhere from $15K to $20K.

The article 10 Things You Should Know About Buffalo Trace appeared first on VinePair.