Fruit-infused beers often seem like a complicated topic among self-proclaimed beer aficionados. Some purists will insist that fruit has no place in a well-conceived brew … and I suppose that they’re entitled to their wrong opinions. But those of us who appreciate the melding of fruit flavors with a sour ale, an IPA, or even a lager know that these beers offer brightness, complexity, impressive taste balance, and, in many cases, an extra level of refreshment.

However, it’s important to acknowledge that some fruits work better in the context of a beer than others. Being an ardent fruit beer enthusiast, I’ve tried countless brews with any number of different fruit guest stars, and my years of research have led to this definitive ranking of the best fruit beers, along with the specific cans and bottles that nail these flavor blends especially well.

One danger of layering fruit flavors into beer is the “potpourri factor,” — when the fruit essence takes on a perfume-y quality and completely decimates the other flavor levels of the beer. Raspberry beers often find themselves particularly prone to this problem; for that reason, some of the most successful raspberry beermakers either lean fully into the fruity attributes and create a brew with more similarities to a fruit cider than to a traditional ale (Belgian fruit lambic is the best example of this style), or they gently incorporate raspberries into a refreshing wheat ale, playing off of both the wheat’s inherent sweetness and these beers’ typically light body. But, of course, sour ales and lagers can also benefit from some raspberry action. When it comes to raspberry beers.

Cherry beer tends to fall victim to a very unfortunate set of circumstances: Some cherry beers are precisely formulated and boast both top-notch fruit flavor and a solid backbone of hops and grains … but others fail so spectacularly on both fronts that they bring down the curve for all of their peers. The natural tartness of cherries can boost the earthy notes of a beer, but it’s also easy for the cherry flavor to overwhelm the brew’s more subtle notes. But when a cherry-enhanced Belgian sour ale (also known as a “Kriek”) or wheat ale accomplishes the tricky task of keeping all of its tastes in perfect equilibrium, then that’s a beer worth adding to your shopping list.

Strawberry beers can fall into many of the same pitfalls as raspberry beers, which is why it’s so unsurprising to see many of the better versions of this style coming from independent brewers who cultivate close relationships with local strawberry farmers. At its best, a strawberry ale produces a crisp and crave-worthy flavor experience that’s ideal for summer: Both refreshing and nostalgic.

Often relegated to a subprime position as the peach’s smaller, tangier, and less juicy cousin, the apricot has a signature tartness that can collaborate beautifully with the mild sweetness of a wheat ale, resulting in a summer sipper that’s perfect right out of the fridge or cooler. A few special examples:

Okay, okay, I can sense your eye rolls from all the way over here. But hear me out: Pumpkin-infused beer, when it’s done right, couldn’t be farther from a Starbucks-inspired monstrosity. Rather, the pumpkin’s earthiness balances out the autumn spices, and the ale’s hoppy buoyancy adds another dimension to round out the full flavor profile.

If you’ve ever received a Belgian-style ale with a slice of orange served on the rim of the glass, then you’re familiar with the symbiotic relationship between oranges and wheat beers. In short, they’re made for each other. Citrus fruits have a remarkable knack for highlighting the most intriguing and satisfying flavors in a beer, and because they’re less acidic than lemons or limes, oranges deliver that citrus brightness in a slightly gentler manner.

“Lime beer” has a very close association with “Bud Light Lime” in the American drinking canon … and I’m here to tell you that there’s nothing. Wrong. With. That. Bud Light Lime might not be a serious beer or a prestigious beer, but it’s a fun beer. And when I’m sitting outside on a sunny day and reaching for a cold can, Bud Light Lime hits the spot. But I also have good news for the elite beer mavens out there who feel curious about lime-infused beer: Plenty of craft breweries are now getting wise to the appealing tang of a beer brewed with lime juice, which accounts for the awesome lime beers now available on the market.

Finally, we come to the best of the fruit-beer best: Grapefruit beer. This flavor earns the top spot because it brings so many beautiful characteristics to the table. It’s got acidity, a floral profile, a hint of bitterness, some structure behind the fruitiness, and it works wonderfully with a wide range of beer styles. It’s perfect, and it’s the winner.

There’s possibly no better adjective to describe the flavor of pineapple than “assertive.” This tropical fruit exhibits plenty of stage presence, which explains why it falls into a “love it” or “hate it” category for many people. For clever brewers, pineapple provides an opportunity to play around with acidity and flavor contrasts while still creating a harmonious warm-weather libation. 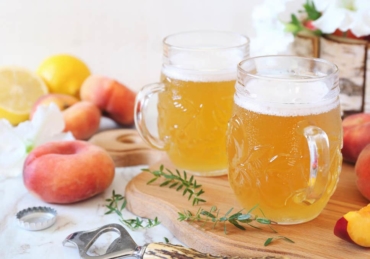